Create your free online birth chart showing all astrological signs, with full interpretations, get your daily horoscope and astrology compatibility chart, progressions and more. Payment is requested for regular users.

This natal chart calculator will generate the position of the planets at the moment of birth, and also a full interpretation. All other astrological features are directly available in the side menu: many types of graphics, daily horoscopes, love comparisons, transits, progressions, and more.
This services are free for occational users, but regular users are asked to pay a subscription.

In order to calculate the Ascendant, you need to provide the exact time of birth and the place of birth. The Ascendant is the sign that was on the eastern horizon at the time of birth, thus it is also called the Rising sign. The points separating the houses, also called cusps, are obtained by dividing the heaven into 12 parts. There are several different methods of dividing the sky, this site uses the Placidus system which is the most common. Placidus divids the houses according the zodiac plane, and since the world is spheric, the size of each house varies with the time of day and the latitude.

The "Name or nickname" field is used only to label the charts in your list of charts. Please do not put the real name in order to avoid recording personal data.

Enter the legal time at the date of birth, the program uses data bases to try to determine the time zone at that epoch. Note that this time zone is a legal matter, in some countries such as the United States it was very freely fixed by each county, city or state until the 1960's. If the program cannot determine the time zone, it displays the most likely and asks you to confirm or modify it.
There are also countries such as in Eastern Europe during and following WWII where the country borders changed frequently and where the occuping forces applied their time zone but it is not certain what zone the local people used.
A last comment: since many people do not consider the exact time of birth to be important, the time on a birth certificate can well be the time the doctor saw on his watch when leaving the operating room, or the approximate time the grand-mother remembered later in the day.
A round time such as 10:00 or 1:30 (instead of 9:53 or 1:37) is most likely approximate. If the Ascendant cusp is in the middle of a sign this doesn't change much. However, if the cusp is close to the neighoring sign, the Ascendant may be wrong.
If you ignore the time of birth, check "Time unknown", the chart will be calculated at noon and the house will not be computed or used in other functions such as daily horoscopes or love comparisons.
Download AstroMart astrology software for PC 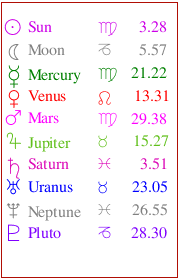 Please send any comments or bug reports to frank@ceze.com

This site uses cookies for advertising and functional purposes !
Ignore or click "OK" to accept, "Reject" to change.

For entertainment only, the responsible of this site take no responsability for the use of the information displayed.